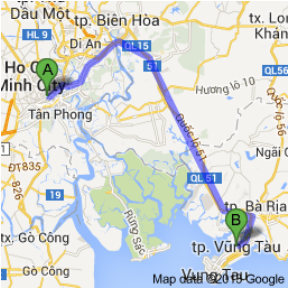 WHERE CAN YOU FIND US?
Vung Tau City is 130 km east of Ho Chi Minh City, in southern Viet Nam: about 80 minutes from District 1 by hydrofoil ferry - http://greenlines-dp.com/ - or just over 2 hours by bus (car and motorbike a bit faster).
​
Vung Tau is easily reached by road from HCMC (see blue line on map), or from anywhere in the north without having to detour via HCMC.  A service that could be useful for anyone travelling from the District 1 backpacker area in HCMC (Saigon) is FUTA Buslines: Phuong Trang, at 272 De Tham, phone (08) 38 309 309.  Their distinctive orange buses run frequently (hourly or more often, depending on demand) between 6 am and 7 pm.  There's plenty of room for luggage (at no extra cost).  They also provide a free "taxi" service from the Vung Tau bus station (near the GPO) to your home or hotel in town.

Several other companies operate frequent bus services all day between Mien Dong (East Bus Station) at 292 Dinh Bo Linh, Ward 26, Binh Thanh district and Vung Tau bus station.  At least one of them: Mai Linh Express - phone (08) 35 117 888 - provides a free taxi service to your Vung Tau residence.  And the Phuong Nam company is one of a growing number that provide direct service between Tan Son Nhat airport and your home or hotel in Vung Tau (and vice versa).

Vung Tau City is on a peninsula where the Saigon River meets the East Sea.  The area known as Back Beach is to the east, and Front Beach to the west (near the ferry terminal and no more than 5 minutes by taxi from the GPO).  There are many restaurants, bars and hotels in the Front Beach area, including immediately across the road from the ferry terminal.  There are lots more restaurants, bars and hotels in the Back Beach area as well, but they're often full on weekends.  More and more western-owned bars, restaurants and apartment buildings are sprouting up along Phan Chu Trinh ("fan choo chin"), which runs parallel inland behind Front Beach from almost directly opposite the ferry terminal and out to Back Beach (ie, the eastern "half" of town).  It's no more than five minutes by taxi from either the ferry terminal or the bus station.

Since February 2020 our weekly meeting place is Lily's Baradise Bar and Restaurant (formerly Tommy's Bar and Restaurant) Next run details always appear in the NEXT RUN box on the left of our home page.  Additional details sometimes appear at the bottom of the previous week's run report.
WHO LET THE DOGS OUT? 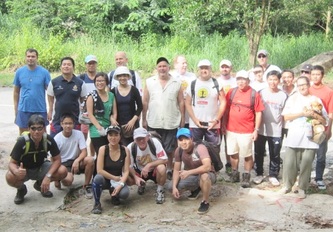 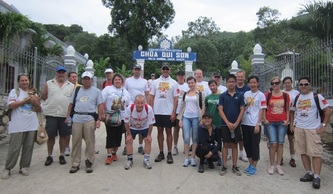 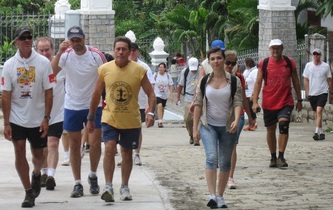 VTH3 has 250+ members on its books: students, local businesspeople, offshore oil & gas workers, expat retirees and many more!  The chapter (or "kennel" in true Hash parlance) runs every Sunday with average attendance between 20 and 40+ men, women and children of sometimes more than a dozen nationalities - we're a truly multinational, "family" Hash.
Multicultural?  Interesting?  Fun?  "You betcha!" 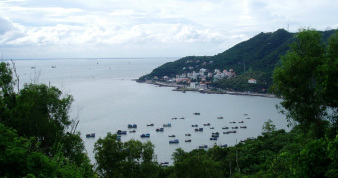 THE AREA
Vung Tau and nearby Ba Ria are blessed with mountains, beaches and unspoilt countryside that provide great pleasure for locals, tourists and Hashers alike. 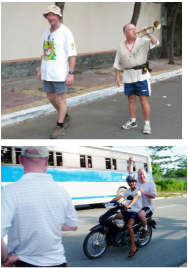 RUN SAFETY
One Sunday you may find yourself on top of a mountain overlooking the city and Vung Tau bay; a week later you could be running or walking through a fishing village and/or the beach, crossing a rickety bridge over "Angel Stream", greeting monks as you pass their pagoda, or...  But wherever we go, the trails are always clearly marked and we communicate verbally with calls of "On On", "On Back", etc as well as whistles and walkie talkie radio when deemed necessary by the Hares.  Sadly, our revered Hash Horn (bequeathed by ex-GM Bob "Dick" Koik in 2003), took a major hit after more than 12 years of extremely valuable service and is no longer capable of producing a useful sound!  The damaged article is held for safekeeping in our archives and has been (at least temporarily) replaced by the distinctive sound of a small but loud goat horn!

​Locals are also super-friendly, and will invariably point you in the right direction or give you a lift if you somehow manage to take a wrong turn.  They'll probably also give you the standard greeting: "Hello, what's your name?"

As you will see in the NEXT RUN box on our home page, we always recommend you wear sturdy shoes and carry a bottle of water for the run (plenty of refreshments available after the run, but not before).  Cover from the sun and insect repellent are also useful, depending on the time of year, trail and subsequent "Down Down" location.  We have a first aid kit to treat relatively minor injuries like cuts, abrasions, sprains, etc.  Anything more serious could involve a trip to the nearest clinic or hospital, depending on run location.
​
​Regrettably, Hashing is not for everyone.  If you're not able to jog/walk 6 km in an hour on varying terrain including pagoda steps, uphill mountain tracks, etc, then you could become a liability to yourself and other Hashers so better to head for the gym until you're able to keep up with the pack.

PLEASE NOTE:  Some of our trails are in fairly dense bushland and you might encounter unexploded ordnance on very rare occasions.  Please DO NOT pick it up or even touch it.  Instead, warn your fellow Hashers of its existence so they can also stay clear.  Take a photo and/or note its location if you can, and we'll inform the authorities after the run.
COSTS
There are no membership fees involved - just a nominal levy each time you run with us to cover the cost of bus hire, equipment, refreshments and other expenditure as may be deemed necessary from time to time.  Run fees vary between "Local" and "Away" runs and are always shown in the NEXT RUN box.  VTH3 prides itself on extremely low Hash fees - we aim only to cover expenses, with a bit left over for contingencies.  Anything more than a "working float" surplus at year's end is used for capital expenditure, contingencies and/or charity - we do our best to hold a "Red Dress (charity) Run" at least once a year.

WHAT ARE YOU WAITING FOR?
If you're looking to explore the Ba Ria-Vung Tau countryside that tourists rarely see, and to meet some friendly locals and expats at the same time, contact us (if possible) then come along to the meeting place (always shown on our home page) any Sunday at 1 pm with a bottle of water (refreshments available after the run but not before), loose-fitting sports clothes, your run fee (see NEXT RUN box, also on the home page), and sturdy footwear - you'll be very welcome!

On On!
VTH3 Mismanagement