"KNOW THE HASH"
- an essential guide for beginners
Uncertain what to do on your first Hash run?
Don't worry, it's just like-minded people having
fun and meeting others while they exercise.
However, there are some "protocols" or points of etiquette
designed to help make things run smoothly for everyone involved:

or if not finished
drinking:

or if not finished drinking:

***For more Down Down songs, see "VTH3 Circle songs" 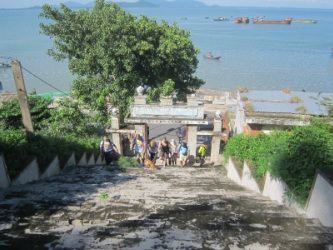 Any Hash that might be too strenuous for some participants will usually be split into "walk" and "run" trails by the Hares.

On such occasions, it is every individual's responsibility to stay within his or her own limits to avoid risking injury and/or unnecessarily inconveniencing others (by causing undue delays, etc).

Additionally, however, the Hares' decision as to which trail is most suitable for individual Hashers should be respected as they have detailed knowledge of what lies ahead. 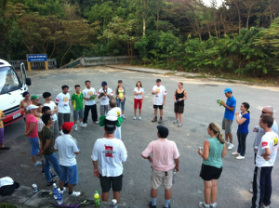 The Circle is held at the end of most runs (not always a true circle, but that's immaterial).  This is when Hash Business is discussed, including the following week's run plans, etc.

It can also be a precursor to or follower of the Down Down when the Ringmaster, sometimes assisted by a Religious Advisor ("whistleblower") will recognise and/or penalise the Hares (depending on the outcome of the Run Report), Newcomers ("Hash Virgins"), Visitors, Returnees and/or Sinners (open to nomination by any member of the Circle).

Penalties can vary, but usually involve at least a "Down Down" of beer, water or soft drink - to the accompanying "Down Down" song (see VTH3 Protocol 101.1 above).  Newcomers ("Hash virgins") need not worry - VTH3 prides itself on being a civilised "family friendly" Hash chapter that treats everyone with respect, and no-one is asked to do or be a part of anything they'd rather avoid.

Another important element of The Circle/Down Down is "Naming" - usually an irreverent Hash name given by mutual consent to a Hasher who's done at least 6 runs and/or 1 Hare set (VTH3 by-law).  For more details, see "Hash names" about halfway down the Hashing with VTH3 page.

Silent running is a sin, punishable at the Down Down.

Hash is not a competition - the idea is for everyone to help each other, thus enjoying some camaraderie which can be continued at the Circle, Down Down and afterwards.

So FRBs (front running bastards) should help those behind by shouting "On On" whenever they pick up a trail - particularly after a check point where there may be several possibilities.

Similarly, those behind the FRBs should also shout "On On" as they pass trail markers, so the FRBs will know everyone's following safely, and so those at the end can be encouraged that they're on the right trail.

Effective use of the "On On" communication signal (also whistles, bugle calls and/or walkie talkies) also helps to minimise time spent looking for lost Hashers, thus helping the Down Down to proceed without undue delay! 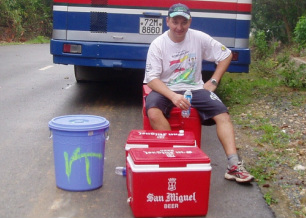 These are revered items in the VTH3 inventory, surpassed only by the "Hash Horn" - a bugle donated in October 2003 by then-GM "Dick" (Hashtag surname considered unsuitable for disclosure on a family Hash website!).  The eskies may only be opened after a run, not before (except by the Beermeisters for counting, icing, and/or replenishment purposes).

It is every Hasher's personal responsibility to bring sufficient water for the run, so anyone denying the non-beer drinkers a major source of apres run refreshment will do so at their own risk!

Further, "take-aways" are similarly frowned upon.  If you can't drink or eat it whilst in the company of fellow Hashers, then please leave it for others to consume.