On this page, we've provided answers to some frequently asked questions
about the worldwide Hash movement in general, and VTH3 in particular.
More Q&As will be provided as we continue to build the website. 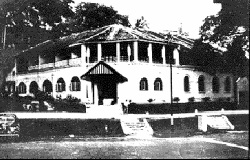 In the mid-late 1930s, some British expats in Selangor, Malaya (now Malaysia) used to meet at a place they called the "hash house" because of its bland food.  They decided to do
some regular exercise, following the old "Hare and Hounds paper chase" model so popular in Europe at the time, and formed a group they called the Hash House Harriers - which quickly spread amongst expats worldwide and became known colloquially as "the Hash".

There are reportedly around 2,000 chapters (aka “Hash kennels”) these days, and anyone finding themselves alone in a strange country need only search online for "[country or city name] hash" and they're likely to find themselves quickly meeting, socialising and exercising with a lot of new friends! 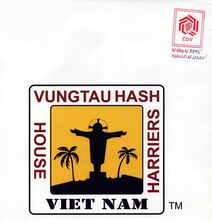 Q.  How and when did Vung Tau Hash House Harriers begin?

Like Hash clubs the world over, VTH3 experienced a few "false starts" over the years for various reasons including a high turnover of key members involved in the offshore oil & gas industry (Vung Tau is Vietnam's epicentre for offshore oil & gas exploration).

Most recently, the club was put back on its feet by (still current members) "Uncle", "Anti" and "Faulty Brakes", who used an old email list supplied by former On Sec Gary "Hung Low" Cooper to canvass people who might be interested in "Re-Hashing the Hash".  Re-Hash run #1 (VTH3 run #482) subsequently took place on 9 July 2011 with a symbolic trail up Jesus Mountain ("symbolic" because the statue of Jesus with raised arms overlooking the East Sea is arguably the most well-known landmark in Vung Tau).

Everyone is welcome to join VTH3 for at least one run - unless you have a track record of indiscretion/s with either VTH3 or another chapter.  And there are no membership fees - only a nominal run fee each week to cover expenses. Please make sure you register by clicking the Registration Button on our home page. If you’d like to know more, use the "Contact VTH3" page on this website or send an email to mismgmt.vungtauhash@gmail.com - please also sign up for our mailing list to get weekly updates and announcements.

Q.  How fit do Hashers have to be?

The Hash is not a competition - it’s a low-cost social activity that combines a little regular exercise with the opportunity to meet and greet new people from widely different backgrounds; however, as a general "rule of thumb", it's expected that participants can run or walk (and/or carry their child/ren) about 6 km an hour for 60-90 minutes.  Any less and they could become a liability to themselves and the group.  In VTH3 in particular, we often find ourselves climbing up and down rocky mountain trails, so anyone with knee, back and/or "vertigo" problems should check with the Hares before joining such a run or you may be wasting your money (sorry, no refunds once we leave the meeting place!).

Globally accepted Hash protocol is that everyone joins in Hash activities (running, walking, climbing, drinking, socialising, etc) at their own risk - and that definitely applies in VTH3!

Q.  How many Hash chapters in Vietnam?

At 3Q2016, there are/were at least five: Hanoi (www.hanoih3.com), Saigon (www.saigonhash.com), Nha Trang (www.nhatranghash.com), Hoi An (www.hoianhash.com) and VTH3 (www.vungtauhash.com).  "Associated chapters" include Saigon Hash Harriettes and Binh Duong H3.  There have also been chapters in Haiphong, Danang, Phan Thiet, Can Tho and probably more - and they may well "rise again from the ashes" like VTH3, if they can find someone locally who's keen enough to get things re-started.  Someone like you, perhaps?