Global branding - the value of having your logo on a VTH3 t-shirt!
Vung Tau Hash proudly boasts 250+ mostly itinerant members from many different countries who travel all over the world for work and play.  To say they add value to our sponsors by wearing their VTH3 t-shirts on their travels is a major understatement!
Do you have any photos of yourself or someone else wearing a VTH3 t-shirt in an unusual location?
If so, send them in to mismgmt.vungtauhash@gmail.com and join our global "rogues gallery" - see below!
​ 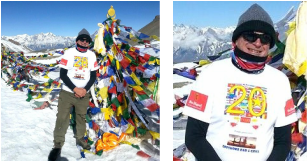 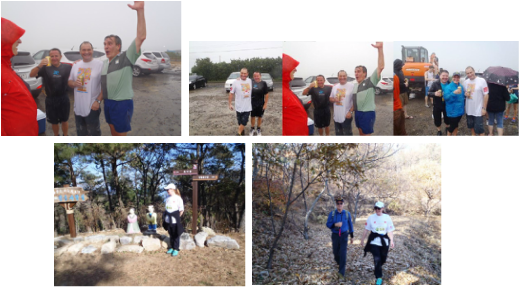 ...and again in Ulsan, South Korea! 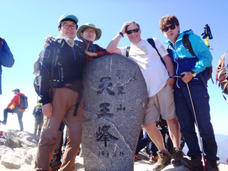 ...more South Korea
Our hardy ex-VTH3 stalwart Cap St Jacques somehow managed to convince a group of friends to join him on a hike up Mt Jirisan - no less than 1,915 metres above sea level!  And they did it all without oxygen masks or sunscreen!

Probably not too many tourists up there, but anyone in the vicinity couldn't have missed CSJ's t-shirt promoting VTH3 major sponsor​ San Miguel! 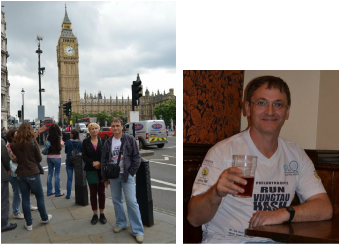 How about the London Olympics!

Live Wire and Private Business in London, just one week before the Olympic Games.

Hiking in "the Rockies" is probably not the best way to meet an awful lot of people - but every photo's worth a thousand words, so sponsors San Miguel, GL Noble Denton, NI-limits interactive digital media agency and SEC Star Engineering can now benefit from exposure on VTH3's '600th run' t-shirt to not only everyone who saw popular Hasher Stephanie "Mile High" Bingham (how appropriate is that monicker!) in the Rocky Mountains, Colorado USA recently - but now also her photo...

Mile High sends their best regards and says she and husband Don "2 cans" Bingham miss everyone in Vung Tau! 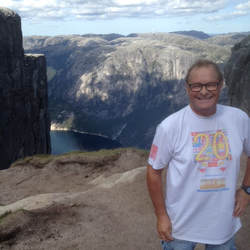 Cap St Jacques atop Kjerag, Norway
​According to Wikipedia, Kjerag or Kiragg is a mountain in Forsand municipality in Rogaland county, Norway. The 1,110-metre mountain sits on the southern shore of the Lysefjorden, just southwest of the village of Lysebotn. Its northern side is a massive cliff, plunging 984 metres (3,228 ft) almost straight down into the Lysefjorden, a sight which attracts many visitors each year. Another tourist attraction, the Kjeragbolten, a 5-cubic-metre stone wedged between two rocks is located on the mountain. The Kjeragfossen waterfall plunges off the mountain down to the fjord. It is one of the tallest waterfalls in the world.
Kjerag is a popular hiking and climbing destination, with many difficult routes going up its steep faces.