HASH HOUSE HARRIERS
The organisation of the Hash House Harriers is decentralised, with each chapter (also called Kennels) locally managed and with no higher-level organisational hierarchy or central controlling organisation There are now close to 2000 kennels with at least one in most major cities in the world. Yet, rules and practices are mostly similar. Local, regional and international events are being organised and held in large numbers and many with a large number of participants. Most, if not all kennels have their own newsletters and websites, and directories are published at some of the Interhash events.
(Adapted from Mother Hash Website)
HASHING IN VIETNAM
Hasher ‘Bluejeans’ (now with KL Mother Hash), remembers that “about half” the early Hashers in H4 were Australian embassy staff, with others from Norway, Germany and several British companies. It was very much a ‘mixed bag’ as Đổi Mới (“Renewal”) in 1986 opened the Vietnam market to foreign companies competing for contracts.
He also recalls an amusing tale from those early days linking Hanoi H3, SH3 and VTH3: A group of Hanoi Hashers visited Vung Tau to run with VTH3 during a brief visit to Saigon (HCMC) for the express purpose of reclaiming the Hash mug that had somehow disappeared after an earlier visit to Hanoi by SH3 Hashers! The mug was duly reclaimed(!), and whenever anyone from SH3 visited Hanoi H3 for future runs, they could see the Hash mug securely fastened to the Religious Advisor’s chain of office! ​
VUNG TAU HASH (VTH3)
​Vung Tau City Hash House Harriers ("VTH3") was founded in 1992 by Captain John 'Anchor' Murt, a master mariner who had spent some time in Saigon (Ho Chi Minh City) and ran with SH3 - according to an entry in the global Hash House Harriers “Global Trash” directory: http://www.gthhh.com/
​The Sea Breeze patrons’ enthusiasm quickly caught on and a second Hash run toward the end of January 1993 saw a much larger turnout. They then collectively decided to do the same thing every other Saturday because it would allow them to have a good Down Down on Saturday nights and still leave Sundays free for the beach. The rest, as they say, is history!
After just one year of operation, the Hash was extremely popular with recently arrived foreign companies vying for brand recognition (the Vietnam-Russia joint venture VietSovPetro was established in June 1981, then 'Đổi Mới' - renewal - was mandated by the VN gov't in December 1986 and soon heralded an influx of other foreign companies eager to exploit new markets).
1994 NEW YEARS DAY HASH
​In the mid-1990's, the international Shell oil company withdrew from Vietnam so Hash numbers began dropping somewhat. The advent of a new venue for "expat leisure activity" - the golf course - also played its part in reducing Hash numbers.

An English supply boat captain John "Get around" Fawcett became Grand Master in 1996 when Captain Murt's job moved him away from Vietnam.  Fawcett left VTH3 about a year later when weekend golf had become a very popular pastime for many expats and a growing number of locals.
​
By the late-1990’s, the Hash fee included a meal after every run and part of setting a Hash trail would be selecting a restaurant which could be out of town if the Hash was returning on the bus from an 'away' run.
Restaurants were always keen to promote themselves, so the Hash dined at a variety of establishments: some excellent and some not so much. The budget was approx. VND70k per head for a multi-course meal and included in the Hash fee.
​Golden Finger relocated to Ho Chi Minh City in 2010 and the subsequent lack of an effective mismanagement committee led to ongoing disagreements about various organisational aspects including the all-important setting of trails. Finally, a decision to discontinue the different after-Hash meal venues in favour of the same "host" restaurant after every run convinced many to stop attending. By April 2011, VTH3 had ceased to operate.
But Hashers never die - they just find new trails - and so it was in Vung Tau when new arrivals helped to restart ("re-Hash") VTH3 just a few months later.
VTH3 "REHASHED"
Martin "Uncle" Ratia (ex-Nowra H3) and Linh "Anti" Nguyen (ex-SH3) had recently relocated to Vung Tau from Nha Trang. A chance meeting with former VTH3 On Sec Gary “Hung Low” Cooper in the Russian beach club led to drinks with Damien “Faulty Brakes” Moran and unanimous agreement to resurrect the Hash in Vung Tau City.
FB reclaimed the “blue bucket” holding precious remaining Hash assets including climbing rope, Hash horn, the Grand Master’s ‘4-leaf clover’ hat and ‘chain of office’; while HL provided email contacts for Uncle to spread the word that VTH3 was about to be re-Hashed! 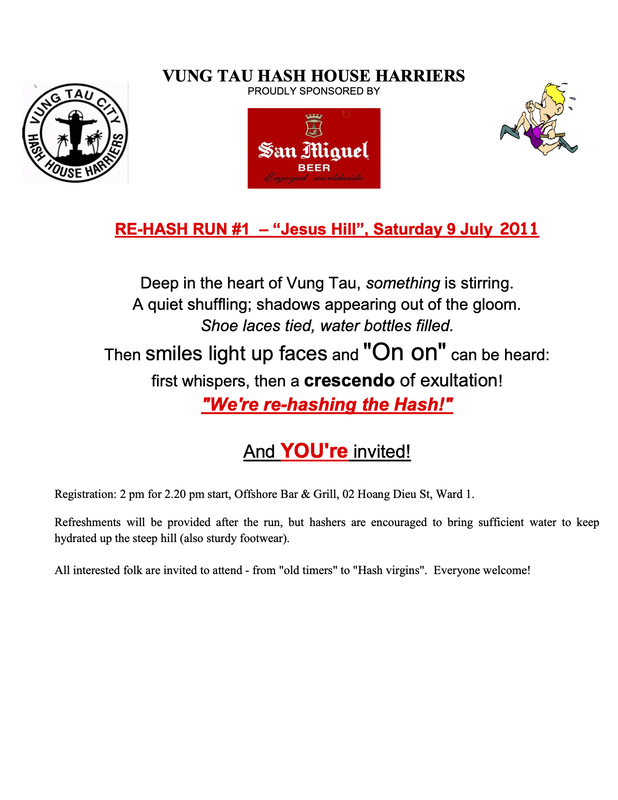 Rehash Invitation
Re-Hash run #1 (VTH3 run #482) took place on 9 July 2011 with a symbolic trail to the statue of Jesus on Small Mountain ("symbolic" because the statue of ‘Jesus with outstretched arms’ overlooking the East Sea is arguably the most well-known landmark in Vung Tau). This was coincidentally also a “joint VTH3/SH3” Hash, courtesy of Lost Our Seoul and his partner who joined on the day from Ho Chi Minh City.
CLICK HERE TO READ THE RUN REPORT FROM RUN 483 - REHASHED
There was no real committee to guide the re-Hashed VTH3, with most decisions made over beers at the end of each run(!). But Vung Tau’s oil and gas workers were gradually becoming less available due to industry rule changes restricting the amount of time they could spend onshore between shifts on the rigs, so the recruitment focus gradually switched onto locals and the growing influx of expat teachers – and volunteers were invited to form the re-Hashed VTH3’s first MMC.
CLICK HERE TO SEE MISMANAGEMENT ROLES
It was also decided to standardise the “Hashing boundaries” according to pre-set bus fares, to make life easier for Hash Cash. So while the Hares “strayed” occasionally (with MMC approval) to Phu My, Hon Tram, Can Gio and even further afield, the primary area for trails looked like this: